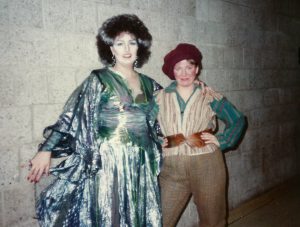 Here I am again, nagging everyone to take advantage of the so-enjoyable Live in HD Met broadcasts. This Saturday, 25 February, is Dvorak’s Rusalka, which is “roughly” the story of The Little Mermaid, a water sprite who falls in love with a human prince and appeals to a witch to turn her into a mortal human. This ain’t Disney, folks…it turns out tragically because, well, it’s opera.

As many of you know, I lived in Prague in the 1990s and fell in love with the Czech language as well as Dvorak’s beautiful music (a shout-out to my long-suffering students who have gamely worked through Czech diction with the Biblical and Gypsy songs, and the Moravian Duets). This is a new production with a stellar cast.

In 1989, I was cast as the witch Jezibaba, performed at Fairleigh-Dickinson University. Ironically, this was a few months before I met my future husband, Tomas Vitek, a Czech national. I was on my own in NYC in early 1989 trying to find a Czech diction coach. But trust me, the language is very phonetic and not as difficult as it looks!

I’ve attached a photo of me as the glamorous Jezibaba (she is frequently costumed as a hag, but not my 1989 production).