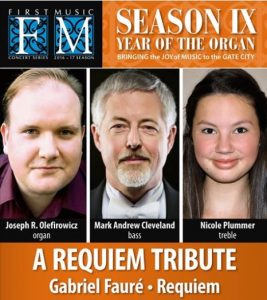 Ask any professional classical singer how he or she feels about choral singing, and they will either make a face, say “no way, never”, or make some snarky comment.  I am no exception.  Most of us pros have had “church jobs” in NYC, Boston, or other large cities where churches with fat music budgets can afford to engage a paid choir, or at least paid section leaders.

When living in NYC during the 1980s and 1990s, I had many such “church jobs”, and for the most part basically just tolerated them. We referred to them as “TMR” jobs (take the money and run). That is not to say that I, and my colleagues, didn’t do our best by showing up on time and singing our hearts out in the choir. I got lucky around 1989 when I was hired by the Church of St. Luke in the Fields in Greenwich Village (http://www.stlukeinthefields.org), where I sang professionally for 5 years, and where I was married in 1993. David Schuler, who is still to this day the music director at St. Luke’s, always chose the most wonderful music, and the 16 voice choir (3 pros per section, and 1 carefully auditioned volunteer per section) was a pleasure to sing in. I used to say that I was the only singer I knew of who actually LIKED their church gig!
The First Church of Nashua’s music series, called “First Music”, was founded in 2008 by Joseph Olefirowicz, which was the year he assumed the position of Minister of Music. “Joe O” is a consummate musician – fantastic organist and demanding conductor. Joe invited me to present a solo vocal recital during First Music’s 2010-2011 season, which he called Vocal Masters. I had a wonderful time putting together a concert of German, Czech, and English songs, and invited my dear friend and collaborative pianist extraordinaire Elizabeth Blood to accompany me. I also performed several pieces for voice and guitar, for which the talented professional guitarist Berit Strong joined me.

My gratifying relationship with Joe and First Church (http://www.firstchurchnashua.org) has continued through the years, as he has invited me to be a soloist when the choir is off, such as Christmas Day.

Earlier this year, Joe asked me if I would consider being an alto ringer for Easter services. A “ringer” is a paid singer who is hired to beef up the section. My talented student Max McGrath is a regular paid ringer in the tenor section. Without hesitation, I agreed because it would be an opportunity to sing in a church choir again (which I had not done in over 20 years), and also to work with a few choir members I’ve known over the years such as Max and my student and good friend Matt Van Wagner, who actually introduced me to Joe about 12 years ago. I freely admit that I enjoy singing harmony, despite being rather rusty (see below).

At first I was a bit, well, disoriented finding myself in a large choir (about 38), and sight reading the alto part of pieces I had never seen. I am a very good sight reader, but very out of practice! Joe’s choices of Easter music were challenging, especially the John Rutter “Alleluia” (lots of “alleluia-s” were warbled that day!) 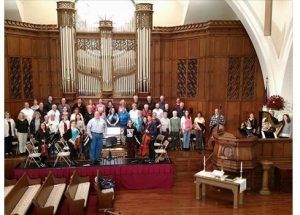 Joe has since invited me to “ring” for two other big services in May and June.  The final concert of First Music’s Ninth Season was Faure’s beautiful Requiem with the Chancel Choir. I had the privilege once again of hearing my colleague Mark Andrew Cleveland sing the bass movements, and a young soprano, Nicole Plummer, admirably sang the treble movement, Pie Jesu.

In late June, I joined in a special Communion service to commemorate First Church’s Associate Minister, Rev. Dr. Jeffrey C. Evans, who was retiring after 32 years of service. Joe composed a very unique three-movement Communion Service for this event. Here are Joe’s notes about the composition: “The opening and closing movements utilize excerpts from some of Rev. Jeff’s favorite scripture passages.  Additional choral works will also include favorite scripture passages from his ‘short list.'” The other, more traditional music, was very gratifying to sing, especially since Joe assigned the short alto solo in Sowerby’s “I will lift up mine eyes” to me.

Another one of Joe’s talents is positioning the choir sections in order maximize the sound considering the First Church’s unique acoustics, and balancing with the honker organ (details in a later blog). As you can see from this rehearsal photo, it’s a challenge to squeeze singers and instruments in and around the choir “loft”. But, it worked!

I am frankly enjoying this “ringer” work – the music choices are always at a very high level, the choir works hard, and I especially enjoy Joe’s artistry during his spectacular organ interludes and improvisational flights of fancy.