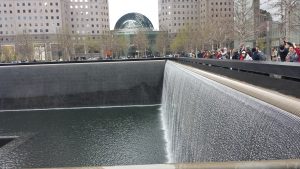 Another view of the Memorial Pool

Back in the 1980s, Christine lived in Manhattan, pursuing her singing career like so many of we aspiring classical singers. Since “changing majors” and graduating from Union Theological Seminary at about that time, she had not visited NYC. So she was not ready to return to New England on Saturday morning after our delightful night at the opera. Therefore, we decided to visit the 9/11 Memorial in lower Manhattan.

There is little I can add to describe the somberness of that “hallowed ground”. As soon as we exited the Fulton Street subway stop, we saw the new first tower, 1 World Trade Center, which you can see in the gallery below. That day was chilly and rainy and cloudy, and I snapped this photo of the tower framed by old historical buildings.

This part of Manhattan has very narrow streets, and the ongoing construction of the second tower and other office and shopping structures, not to mention the hoards of tourists, made for slow going.

Our next stop was St. Paul’s Chapel at Trinity Church, which is where the first responders would find food, sanitary facilities, rest, and a warm welcome after hours of labor at the downed towers.

I hope my photos convey some of the atmosphere of the Chapel, which was quite moving, as well as the area of the ongoing construction and the Memorial Pool.

Another unique part of St. Paul’s Chapel is the Ark of the Covenant that was installed in 2014. Below is a photo and you can read an article about it by clicking on the above link.

I will end this brief blog with the following poem by J. Chester Johnson. After about 2 hours downtown, Christine and I made our way back to Grand Central where we got the train to Stamford, hopped in my buggy, and arrived back in NH by late afternoon. Surely one of my most memorable visits to NYC.

It stood. Not a window broken.
Not a stone dislodged.
It sold when nothing else did.
It stood when terrorists brought September down.
It stood among myths. It stood among ruins.

To stand was its purpose, long lines prove that.
It stands, and around it now, a shrine of letters,
poems, acrostic, litter of the heart.
It is the standing people want:
To grieve, serve and tend
celebrate the lasting stone of St. Paul’s Chapel.

And deep into its thick breath, the largest banner
fittingly from Oklahoma climbs heavenward
with hands as stars, hands as stripes, hands as a flag;
and a rescuer reaches for a stuffed toy
to collect a touch;
and George Washington’s pew doesn’t go unused.

Charity fills a hole or two.

It stood in place of other sorts.
It stood when nothing else could.
The great had fallen, as the brute hardware came down.