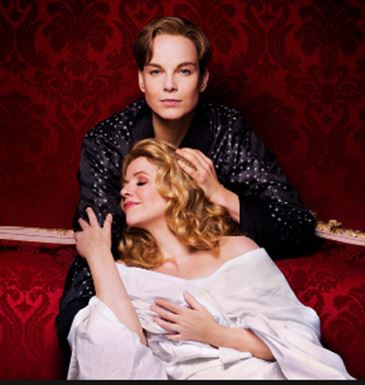 As everyone in my life knows, I am mad for opera…whether singing opera or attending opera. This started when I was about 13, and was taken to my first opera, Puccini’s Tosca, by my beloved Aunt Jeanette and Uncle Ross.  I will never forget that experience, at the Fox Theatre in Atlanta, back when the Metropolitan Opera did national tours. “Opera Week” in Atlanta was THE social event of the year, and the Met presented 7 full productions between Monday and Saturday evening, including a Saturday matinee. (The Met stopped its National Tour tradition in 1986.)

I have been hooked ever since. I feel opera is the ultimate multi-media experience.

Last fall, I heard a semi-staged production of Strauss’s Der Rosenkavalier, which is one of the most popular and beloved German operas ever written. This was at Boston’s Symphony Hall, presented by the fantastic Boston Symphony Orchestra (BSO), with their new artistic director, Andris Nelsons, on the podium. But what really drew me in were the two divas performing 2 of the 3 principle roles, Renee Fleming in the role of The Marshallin, and Susan Graham as Octavian. I will not go into the story here, which you can read here: Der Rosenkavalier. Susan and Renee have performed these 2 roles frequently through the years, all over the world, so it was no wonder how engaging and special are their portrayals of the aging Marschallin (that is her title, the character’s real name is Marie Therese) and her young lover Octavian.

I understand that Susan and Renee did the staging themselves, because normally, “concert performance” of an opera is what we call a “park and bark”…just stand there and sing. But this performance used a minimal amount of  “sets” and a few props to enhance the production, as much as possible on the Symphony Hall stage and in front of a 100 piece orchestra! A decorative chaise lounge was placed downstage, in front of the orchestra and to the left of the podium. In the opening scene, the Marshcallin and Octavian are traditionally seen embracing after “a long night of love.”

Now, lest you think this is a lesbian opera (hey, that’s a good idea…someone should write one), the role of Octavian is referred to as a trouser role, or pants role (also referred to as a “breeches role”). This is a long tradition in opera, dating back to the pre-Baroque era. A woman is cast in the role of a young man, simply because a woman’s voice sounds much more youthful than a man’s. Another very famous trouser role is Cherubino in Mozart’s Le Nozze di Figaro. Handel operas are also filled with trouser roles.

But back to the BSO production. It had been rumored as early as last fall that Renee might be retiring from staged opera. She has had one of the most distinguished careers of any American soprano I can think of. Not only is the voice breathtakingly beautiful, she is also a very beautiful woman. Her beauty and vocalism are astounding for a singer of 58. Right on, Renee!

This performance mesmerized me, so I immediately decided to spring for an orchestra seat to see the Met’s new production scheduled for spring of 2017. Renee was retiring The Marschallin, one of her signature roles, and the beautiful Latvian mezzo soprano, Elina Garanca, was to sing Octavian. Here is a photo of Renee and Elina in costume for these two roles. It’s been commented, even by Elina herself, that her drag self resembles a young Leonardo di Caprio! Frankly, this is the most convincing trouser role get-up I have ever seen. And let me tell you, there was plenty of sexual heat and electricity in their performance.

Der Rosenkavalier is set in the 18th century, during the reign of the Austro-Hungarian Empire. So traditionally, everyone is in very fancy, ornate costumes and the sets are also very “period.” However, Robert Carsen, the designer of this production, chose to set the opera in 1910, a few years before the start of World War I and on the brink of Europe’s and Vienna’s cultural downfall.

Joining me for this magical evening was my dear friend Christine Boardman, at one time a very fine mezzo-soprano, and now an ordained UCC minister. Christine and I met “way back when” at a vocal competition in St. Louis when we were grad students (she at University of Illinois, I at Indiana University). We cooked up this trip together at sort of the last minute, so Christine’s seat was not near mine. We drove down on Friday, April 21, checked into the Grand Hyatt at Grand Central, and after a little rest, dressed up in our opera-going duds and set off for the Upper West Side. I had found a restaurant that could accommodate the early curtain hour of 7:00, Boulud Sud. Before our 5:15 reservation, we strolled around the area and stopped at Fiorello’s for a cocktail. I had a “Venetian Aperol Spritz”, which is composed of aperol, blood orange juice, and vanilla flavored prosecco. How’s that for exotic!

A coda to my experience sitting in my wonderful orchestra seat was chatting with Mark, a middle-aged guy from New Jersey, who discovered opera some years ago when he heard Jessye Norman on the radio. Mark told me that neither his wife nor kids were into opera, so a few times a year he travels into Manhattan to attend Met productions. He didn’t know much about this opera, trouser roles, and opera in general…he just knew that he loved opera and was obviously enthralled with the sounds that the human voice can make. Oh, and he is a huge Renee Fleming fan.

As a “teacher”, I enjoyed answering his questions about this particular opera and other things “operatic.”

The production ended at about 11:20 and Christine and I made our way back to our hotel and slept soundly, and for me, still hearing the glorious, tear-inducing Act III trio, a legendary moment in all of opera.