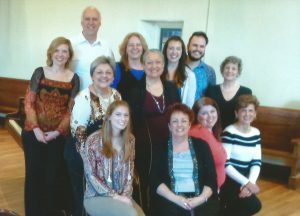 Every couple of months I schedule a Studio Class for 2, 3, or 4 singers. These classes have multiple purposes. For one, we work on repertoire with a goal in mind. For another, the class provides a valuable performance opportunity, however informal.  The students sing for each other, and a pianist is engaged so that I can sit back, listen, and observe.  My favorite collaborative pianists are the three best in the state of NH:  Elizabeth Blood, Charlie Blood (Elizabeth’s father), and Blake Leister.

Each singer prepares two pieces to perform from memory, which we work on during their lessons. Before singing they introduce their song or aria and give a little background information about it. This class is conducted in a “master class” format, in which I critique their performance. I also encourage the other singers to comment, because I think it is important for singers to learn to listen critically.

Everyone enjoys the opportunity to perform, even in front of a small audience, and as we all know, performing/singing even before an audience of 1 can set up all sorts of levels of nerves and anxiety. One of the goals of these Studio Classes is to learn techniques for overcoming performance anxiety.

Starting last December, 10 of my students began preparing for something a bit different, what I call a Performance Class, which follows a similar format to the Studio Class, but with less talking/critiquing and more music making. I decided the singers’ selections would be mostly English and in a light hearted vein.

With that in mind, the singers prepared standards by Arlen and Kern, theatre songs of Bernstein, a bit of G&S, and a few duets (“We are Women”, for instance…always a blast).

I rented a large hall at a nearby church, because my studio is not large enough to accommodate 10 singers, plus any spouse or SO who might have wanted to attend, and scheduled the class for the afternoon of Sunday, February 26.

I can’t tell you how much fun it was to hear and watch my talented students perform pieces that displayed their strengths  – not only vocal strengths, but acting chops as well. Some were performing newly learned songs, others repeating pieces from past performances.

At the end of the program, I performed two of the beautiful Dvorak Moravian Duets https://en.wikipedia.org/wiki/Moravian_Duets with my student, soprano Janet Wittenberg. If you’ve been reading my recent posts, you know that I have been in a real “Dvorak mood” lately!

Huge thanks to Elizabeth Blood, whose sight-reading is legendary, and who switched styles at the drop of a hat.

It’s unanimous – everyone loved the experience, so I plan to schedule another Performance Class for early fall of this year.

PS – Yours truly dipped her toes back into the Wagner pool, ending the afternoon with one of his slightly less challenging arias, Sieglinde’s “Du bist der Lenz” from Die Walkure. Felt wonderful to let the Gs and A flats rip in that resonant space!

Save
Posted in Studio News, Workshops