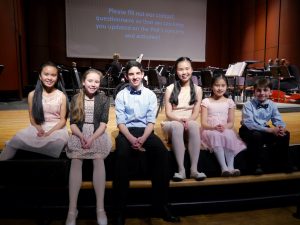 This is the title of a lovely concert I heard last Sunday, March 12, at the Stockbridge Theatre at Pinkerton Academy (a fabulous venue, by the way).

This was part of the New Hampshire Philharmonic’s current season.  The NH Phil’s conductor, Mark Latham, always puts together unique programs and this was no exception.

I was alerted to this concert by my close friend Elizabeth Blood, whose husband Romeo Melloni, also  a close friend, was premiering a composition that was commissioned by a distinguished professor of piano, Mila Filatova.

As the title indicates, the piece is a short piano concerto whose solo part is performed by children. The concertino was written to give an opportunity to very young musicians to play with an orchestra and to create a sense of community for families at the moment of the performance. To create music that is easy to play but still challenging on a musical level the composer has assigned the solo piano part to two performers per movement.  The first movement, written in sonata form, is song-like; the second is slow and it is written in ternary form; the last movement is at a faster tempo and it has contrapuntal texture.

I have to congratulate Romeo for composing music that was not only lyrical, dynamic, and challenging, it was perfectly matched to the strengths of the young musicians. No “Chopsticks” or “Heart and Soul” here…this was real music. I mentioned to Romeo and Mila afterwards that this unique and ingenious piece should be marketed to other orchestras in order to give young, ambitious pianists a taste of what it’s like to play with an orchestra.

Mila’s students, 2 boys and 4 girls, ranged in age from 9 to 13. When it was time for their piece, they entered the stage with confidence and an underlying excitement, which was evident from their faces and posture. As with any piano concerto performed with orchestra, Mark, the conductor, looked to the first two soloists to see if they were ready to begin. He then raised his baton and off they went.

The piano parts were for two performers, four hands, meaning two soloists shared the bench and more or less played as a duet, with orchestral accompaniment. The orchestral scoring was for a chamber orchestra, mostly strings, so that the piano parts would not be overwhelmed by a full-scale orchestral sound.

When the first movement ended, the next two performers took to the bench for their movement. And so it went for the third movement. These young artists were Alessandra Mariano (13), Charlie Molten (9), Kedai Wei (13), Melinda Hu (9), Anna Musteata (12), and Nathan Morrissey (14).

I have to say I was astonished and overcome with impressions of how poised, confident, and artistic these young musicians are. Heck, I’ve been performing professionally for over 40 years, and I still get butterflies in the tummy when I walk on stage to sing with an orchestra (probably the most exciting thing a singer can ever do, with the exception of singing an opera role with the orchestra in the pit).

They did not just hit the keys, they played with expression and commitment and joy, not to mention solid technique. Hats off to Mila and her exemplary teaching style.

The other parts of the concert included the following: Britten’s “Young Person’s Guide to the Orchestra”; Arturo Marquez’s “Danzon No. 2”; John Adams’s “Short Ride in a Fast Machine”; and Aaron Copland’s “Four Dance Episodes from Rodeo“. Mark gave brief, informative remarks before each piece.

The title “Drawn to the Music” was due to the projections on a large screen above and behind the orchestra that featured artwork by students from all over New Hampshire. All in all, a very “youthful” afternoon what with drawings by children and the 6 young pianists at the keyboard.

As an aside, the Britten piece requires a narrator, which was beautifully delivered by my voice student Candace Gatzoulis.