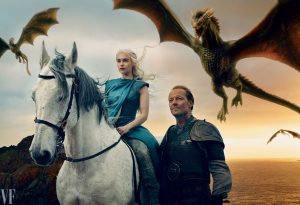 On Monday night, March 6, I had a unique and most un-Janice-like outing to the TD Garden in Boston. Nope, nothing remotely sports related, rather a “Game of Thrones Live Concert Experience”. I attended with a close friend who is a die-hard GoT fan (thank goodness, she was willing to drive to Boston, find parking, and drive back home to NH). My interest in this event, aside from spending time with my friend, was to experience the film score live.

As we all know, those premium channels hook you by offering 2 or 3 months of free viewing, and HBO is no exception. So back in 2010, when the series began, I was able to view the first season. Aside from the superior acting and stark (no pun intended) visuals,  the music was evocative, dramatic, and very orchestral.

The composer, Ramin Djawadi, who has also scored such full length movies as “Westworld” and “Iron Man”, uses leitmotifs, or themes, for characters and events. This, of course, is nothing new in classical music – Wagner was one of the first to use this device for characters, emotions, and events, especially in his epic Der Ring des Nibelungen (the “Ring Cycle”).

The GoT “live concert experience” was just that – an experience. The TD Bank arena is set up like a normal arena…a huge oval with the playing area in the center. There was a 30 piece orchestra which played many of the themes from the GoT series, while snippets of the episodes were projected on huge screens above the audience. Of course, the live music was amplified, and at times a bit too loud for me (hands to ears).

What was the most intriguing was the use of unique instruments for effect – described by the composer, when introducing the soloists, as a collection of “ethnic flutes”, various percussion instruments, and most beautiful and effective, a hammered dulcimer. Djawadi himself played this instrument when he stepped away from conducting the orchestra. There were also vocalists adding texture to the orchestral sound, mostly singing on neutral syllables.

I could not help but think about one of my favorite composers, Erich Wolfgang Korngold, composer of gorgeous songs, chamber music, operas and numerous film scores.

Another giant of film scoring is John Williams, composer of, among many others, the “Star Wars” films. Williams has discussed at length his admiration of Korngold, and frankly, I have heard almost identical passages in Williams’s scores of Korngold’s melodies and orchestration.

All in all, an exciting evening of live music, and something very different for me. Here is a detailed review from the NYTimes, where the “GoT Live Concert Experience” was performed the very next day at Madison Square Garden.