I don’t know many people, in this current day and age, who pay much attention to, or know that much about, World War II . Frankly, I wouldn’t myself but for a recent renewed interest in my dad’s war record.

Like many veterans, Dad didn’t talk about his service much. I once asked him, “Dad, you were only 22 when you enlisted – weren’t you scared about what you were getting into?” His reply was, “We were all too young and dumb to know what was ahead, we just did what we were told.” I chalk that up to the bravado of youth.

Malcolm Grey Edwards passed away in 1997. All I knew while he was alive was that he was a member of the Army Air Corps (the predecessor of the US Air Force)., and his involvement with the bombing of the Arnhem Bridge in Holland.

Dad was a bombardier on one of the most famous and crucial aircraft of the war, the Martin B-26 Marauder, a twin-engined medium bomber built by the Glenn L. Martin Company and in use from 1941 to 1945.

The bombardier (one who bombs) sat in the glass nose of the aircraft and pulled a lever (I assume) that dropped bombs on strategic targets.

Cornelius Ryan, the author of the book “A Bridge Too Far” and subsequently the movie of the same name, consulted with Dad about his experience during that operation in 1944:

Operation Market Garden, September 1944: The Allies attempt to capture several strategically important bridges in the Netherlands in the hope of breaking the German lines.

My dad was the bombardier who directly dropped a bomb on the Arnhem Bridge.

I learned about this from my second cousin, Matt Edwards, who is the grandson of our Uncle Bill, Dad’s younger brother. Matt is a historian and what I consider the family archivist. 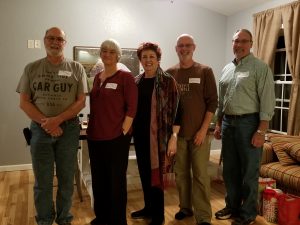 Here is a photo of my sister Anita and me, along with Bill’s three sons, from left to right, Ronnie, Larry, and Tim. Anita and I more or less grew up with our first cousins and it was a joy to me to be able to reconnect after so long, and to meet their children and grand children at the Edwards family reunion on December 23rd.

My sister Anita and I were both born in Asheville, and we lived there until 1959 when we moved to Georgia where Dad was transferred when he was hired by the U.S. Forest Service.

When Uncle Bill passed in 2010, Matt gathered war memorabilia that had belonged to Bill, including Dad’s original flight diary – a very small booklet that would fit into a vest pocket. Dad chronicled all of his missions, including D-Day. I had no idea that that was also one of his missions on June 7, 1944. 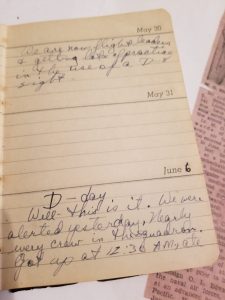 The diary is small and delicate, of course, since it is over 60 years old. I used my cell phone to snap photos of a few of the pages, but they are not very legible since Dad’s handwriting is somewhat faded. However, here are the first couple of pages where Dad describes the first few hours of this mission.

Matt’s daughter Olivia will make a high-definition scan of all of the diary, and I will be thrilled to be able to read it in its entirety.

I consider Dad’s flight diary an historical document, and am so proud of his bravery and valor (even though, in his words, “we didn’t know what we were getting into”).

My sister and I left the diary in the capable hands of our second cousin Matt, the family historian, because we know that he will take very good care of it for posterity. As Matt told me a few months ago when we were planning this reunion, “I will bring the diary to the reunion in December so you can ‘love on it'”, which I certainly did. 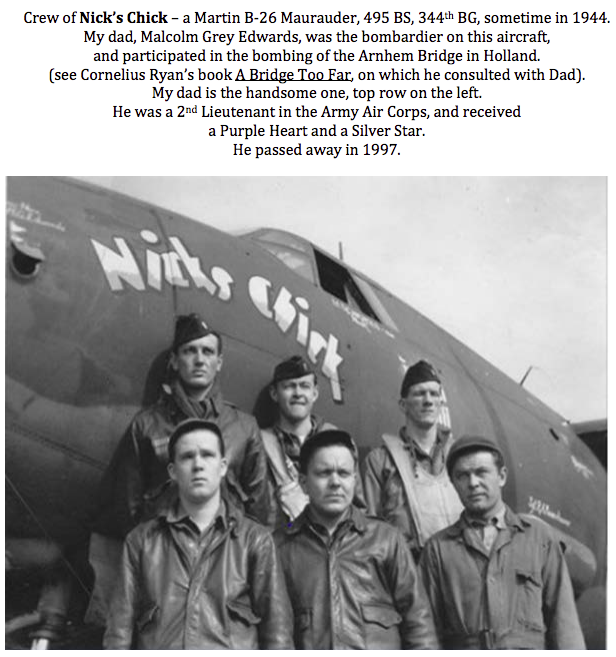