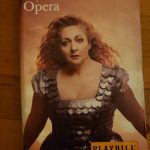 On March 25th and March 30th , 2019, I gorged myself on my favorite Wagner opera, Die Walküre (The Valkyrie). Some may consider this an indulgence, or an obsession. I consider it wallowing around in one of the most emotionally draining and intellectually challenging operas ever written.

My dear friend and voice student Anne Orio and I spent 2 days in NYC (March 25-27), the purpose of which was to see a live performance of Die Walküre in the revival of Robert LaPage’s controversial production of Der Ring des Nibelungen. It was thrilling to say the least to hear the opera “live and in person” in the acoustically wonderful Met theatre. As some of you know, I have sung the role of Fricka in this opera many times when Arizona Opera produced the compete Ring in 1996 and 1998. So I have a very personal attachment to this character and this opera. 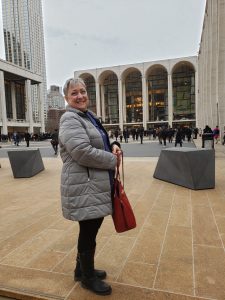 Anne Orio in front of the Met.

While the live performance was terrific, frankly I enjoyed the same opera even more when I heard it again, just 5 days later on March 30 th at a movie theatre in Atlanta during a visit with my sister Anita. How could one’s experience not be enhanced by the excellent closeup camera work of these “Met Live in HD” broadcasts? The celebrity host or hostess, interviews with the cast right as they leave the stage, visits to the costume or scene shops – all contribute to the massive artistry that the Met manages to put together in presenting around 27 productions and over 200 performances each season. It boggles the mind.

I heard the same cast both times – Christine Goerke (Brünnhilde), Greer Grimsley (Wotan), Stuart Skelton (Siegmund), Eva-Maria Westbroek (Sieglinde), Günther Grossböck (Hunding) and Jamie Barton (Fricka) – who were in top form. Both my sis and I were in tears during the finale of Act III, Wotan’s Farewell. I was concerned that the length and intensity of the afternoon would be a bit much for a Wagner “novice” (my sis), but she really got into the story and the drama (thanks of course to the excellent subtitles). 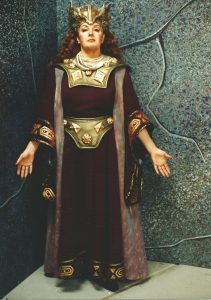 The intermission features were especially compelling, such as a long segment about the Met orchestra’s brass section. There were interviews with a number of the excellent brass players who are obviously very into the orchestration, and the fact that Wagner invented/developed new instruments in order to get his desired effects, such as the “Wagner tuba.” Certain brass players talked extensively about Wagner’s use of “leitmotif” to musically illustrate an object (the sword, called Nothung), or an emotion (Siegmund and Sieglinde’s passion).

I also enjoyed seeing Deborah Voigt once again serving as the hostess. She looks wonderful, and was obviously touched by references to her having sung Brünnhilde back in 2012 when the LaPage production premiered. 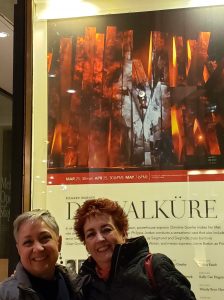 Janice and Anne in front of Die Walkure poster in NYC

I am so grateful that I am a “member of the [Wagner] club”, having had the opportunity of singing Fricka, and more recently, singing excerpts of both Sieglinde AND Fricka with the Boston Wagner Society just last November. As mentioned, Die Walküre is deeply personal to me, but for now I will stop wallowing around in Wagner, until I hear the concert performance this summer that the BSO is presenting at Tanglewood.

Hmmm…that will make a total of THREE Walküre-s in one year. I would say this is some sort of crazy addiction!