In June of 2016, I spent a glorious week in Venice with my close friend and colleague Cindy Sadler. We had met in the 1990s while performing in Arizona Opera’s Ring Cycle. Cindy was the only artist who had appeared in all four operas (as Erde, Schwertleite, and First Norn), while I sang the role of Fricka in two of the four operas of  the cycle, Das Rheingold and Die Walkure.

A close friend who lives in Venice, Simone, arranged for us to visit the small Wagner Museum in the Palazzo Vendramin, where Wagner passed away on February 13, 1883. We were treated to a private tour of the museum by a member of the board of the Wagner Society of Venice, Robert Campello, a very informed, friendly, and fluent English-speaking Venetian. The palazzo is now a casino that allows the Venice Wagner Society to use 4 of the 24 rooms rented by Richard and Cosima Wagner as a museum and memorial to Wagner.

None of the original furnishings (artwork, furniture, personal items) had remained, and the four rooms are sparsely furnished with period items, including a sadly out of tune piano and an even sadder harpsichord.

Other than the many photos of the Wagner family and an especially interesting one of his casket being loaded onto a gondola for transport back to Bayreuth, there was little of interest. Robert’s commentary, though, was quite enlightening and helpful.

At the end of the two hours of lecture and discussion, Robert politely asked if Cindy and I would sing something (Simone had informed him that we were both Wagnerian singers). Alas, there was nothing in the way of proper accompaniment due to the out-of-tune keyboards, or I would have managed to accompany both of us.

So we proceeded to sing a capella. Cindy sang “Weiche, Wotan” from Gotterdammerung, and I performed “Der Engel”, one of the five Wesendonk Lieder. Robert was thrilled by this spontaneous mini-concert. But even more thrilling, for us, was being present in the very rooms where Wagner had lived and died. It was a grand experience.

Here is a photo of Cindy and me in front of Wagner’s bust. 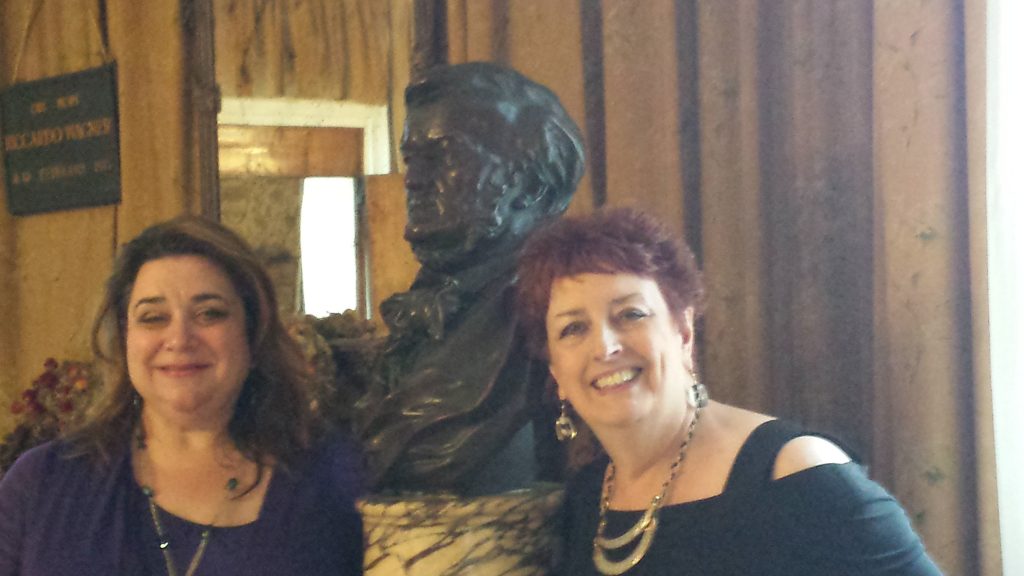