Before detailing my wonderful experience at the Barcelona Festival of Song (BFOS), Patricia Caicedo recently posted the full student concert from July 12, 2019. If you scroll to the 17 minute mark you will see my performance of Osvaldo Lacerda's haunting lullaby, "O menino doente", which I sing in Brazilian Portuguese. Many thanks to our language coach Dr. Lenine Santos.

Although I have been back home for over a month, the artistic and educational aura of Dr. Patricia Caicedo’s wonderful Barcelona Festival of Song is still with me.

For several years I had been contemplating attending this two-week, intensive course of study of Iberian and Latin American song, so early in 2019, I decided to attend and am so glad that I did! 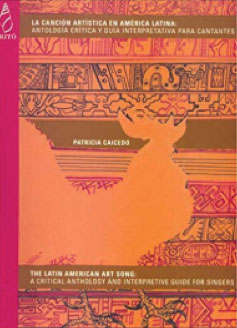 I first became aware of this program when I was given a copy of Patricia’s beautiful “Latin American Art Song: A Critical Anthology and Interpretative Guide for Singers”

This book contains 48 art songs from ten Latin American countries and begins with an introductory study that discusses the art song genre and the genre's birth and development in Latin America. The book also contains notes about the songs in the anthology and a biography of their composers. The song texts are in Spanish and Portuguese. Each song is in its original language, with English, Portuguese and Spanish translations as appropriate. All of the original poetic texts are transcribed into International Phonetic Alphabet (IPA).

It is a highly detailed and beautifully printed volume which certainly whetted my appetite to learn Spanish and Latin American repertoire beyond the usual Rodrigo, DeFalla, Granados, etc.

2019 was the 15th year of BFOS, and Patricia is putting together a documentary to commemorate this milestone. This year, there were 10 women attending (all American except for one Australian).

The 10 day course consisted of morning lectures on various composers of the genre (PowerPoint presentations and audio clips), and afternoon masterclasses with experts on the languages of the songs we were assigned (4 each in Spanish, Portuguese, and Catalan). At the end of the two weeks of study and diction instruction by experts in these respective languages, the 10 of us presented two nights of concerts, the first in the beautiful Biblioteca de Catalunya  (National Library), the second in the Reial Cercle Artistic.

The faculty that Patricia assembled was of the highest level of artistry, musicianship, and expertise. We had two wonderful pianists – Nikos Stavlas  for our masterclasses, and Manuel Ruiz, a staff pianist at the Liceu opera house, for our two public concerts at the end of the course.

Some months ago, I learned that one of the BFOS faculty members, Dr. Jose Lezcano is on the guitar faculty at Keene State College right here in New Hampshire! I contacted Jose prior to the course in order to introduce myself, and he offered to send me some of his original compositions which we performed together at the first concert.  This piece, “El Caer de la lluvia”, is from Jose’s song cycle Canciones de Lluvia (Songs of the Rain). It was such a pleasure to meet and work with Jose, and I hope that we can collaborate in the future.

Another outstanding faculty member, Dr. Lenine Santos, instructed us in Brazilian Portuguese – another challenge for all of us! Lenine’s teaching style is gentle but thorough and I especially enjoyed singing in concert a beautiful song, “O menino doente” (The Sick Little Boy), by Osvaldo Lacerda. Like many “foreign” languages, the vowels are not pronounced as they appear (or at least as we native English speakers would pronounce them), and Lenine was gently insistent that I sing them with the proper diction. My inflection was probably not very authentic, but I had very positive response to my interpretation of this sweet, haunting song.

Our Spanish diction was honed by Patricia herself

Patricia is an accomplished recitalist of the highest artistic style – elegant, authentic, beautiful, and giving…everything an artist needs. She is enchanting in her delivery of Spanish, Portuguese and Catalan songs. Indeed, the world is fortunate to have such a passionate advocate for Iberian and Latin American song repertoire.

There were six concerts sponsored by BFOS, all open to the public and fortunately for we participants, free to participants. The opening concert was Patricia and Nikos’s evening at the gorgeous Palau de la Musica, one of the most celebrated concert halls in all of Europe. Here is a photo of Nikos and Patricia (note her sweet “musical” gown). Patricia’s voice is a beautiful, lyric soprano. She sang 14 songs in various languages (Spanish, Catalan, and Portuguese), accompanied by Nikos, and her presentation and artistry could not have been more expressive and moving. It was so obvious that Patricia and Nikos are long-standing colleagues. The affection and complementary artistic level of this pair was sweet in its authenticity and complementary collaboration. This was a grand way to kick off BFOS. 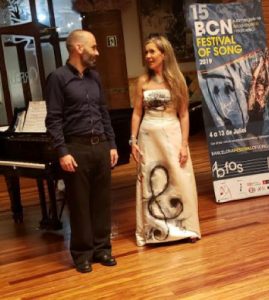 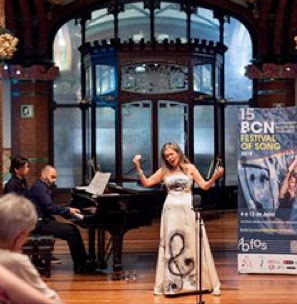 Another view of Patricia on opening night in her adorable “musical” gown.

There followed on subsequent nights public concerts sponsored by BFOS as follows: Darryl Taylor, countertenor; Nikos Stavlas (who played a concert of all-female composers, including two pieces by New Hampshire’s own Amy Beach!); Lenine Santos, tenor; Jose Lezcano, guitar; and Alba Guerrero and Manuel Castilla, singer and guitarist, in an intense and wonderful evening of flamenco. 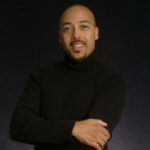 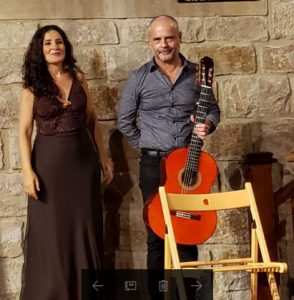 BFOS concluded with two concerts by participants. In these two concerts, I sang a total of 5 pieces, one a duet with soprano Laura Bernay, “Vidala” by Carlos Lopez Buchardo. My two personal favorites were “Al banco solitario” by a female Argentinian composer, Yvette Souviron; and “O doente menino” by Osvaldo Lacerda. The latter is in Brazilian Portuguese and take my word for it…this language is VERY far from Spanish! Lenine – thank you for your patient and detailed instruction!

Here are two group photos from our participant concerts on Saturday, 12 July and Sunday, 13 July. 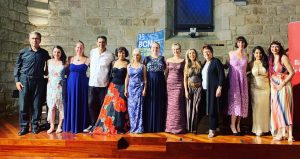 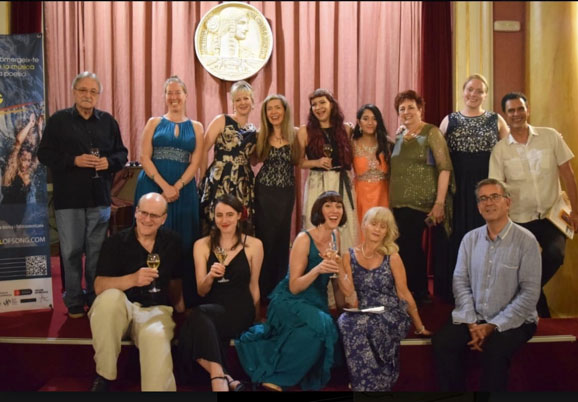 A few participants stayed in a Residencia a fairly short walk from the venue where we had our classes and where some of the concerts were held. I’m happy to report that physically I held up fairly well.  The day before classes started, I met up with Frances Mitchen Diago (mezzo) from the D.C. area, and Frances and I soon became pals with two other participants, Cherie Hughes (mezzo) from the Seattle area and Alexa Anderson (soprano) from San Francisco. The four of us had great fun together with tourism and also enjoying tapas and sangria following a concert, seated outdoors at one of the many restaurants near the Residencia.

Other participants either stayed in hotels or with friends made during previous BFOS sessions.

Cherie was the “cruise director” in that she organized a lot of fun activities for the four of us. The most exciting was an evening of flamenco with a professional troupe, Gala de Estrellas del Flamenco.  The fee for this show (about EU 80) was money well spent…we had a fantastic buffet dinner with all the sangria and wine and other alcoholic goodies we could drink, which was followed by a nearly 90 minute show. The room and stage were rather intimate, and we had seats not 10 feet away from the artists.

Here is a short definition of “Flamenco”:

A style of dancing, characteristic of the Andalusian Gypsies, that is strongly rhythmic and involves vigorous actions, as clapping the hands and stamping the feet; a style of instrumental or vocal music originating in southern Spain and typically of an intensely rhythmic, improvisatory character performed by itself or as an accompaniment to flamenco dancing.

I will also add that the male vocalists sang in an Arabic sounding, chant-like manner which added much to the mood and character of the stylized dancing and guitar playing.

That about sums it up.  These artists were costumed beautifully, the dancing was mesmerizing, the 3 guitarists used their instruments like assault weapons (by that I mean their intensity and dynamics and level of strength and passion with which they played and held their instruments).

There were two female dancers and one male, as well as three vocalists (all male). There is a type of flamenco that uses castanets and fans, but in Barcelona the female dancers used only their hands in the most expressive and exotic positions I’ve ever seen. This evening was certainly one of the highlights of my stay in Barcelona.

Here are some photos of the flamenco troupe, the cover of the program, and one of Alexa and me at dinner prior to the performance. Note: audience members were invited to photograph the artists during the performance. 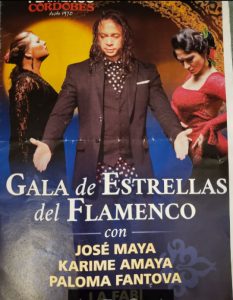 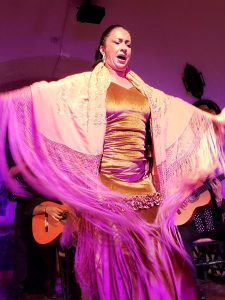 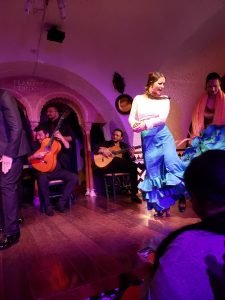 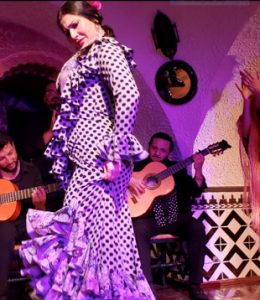 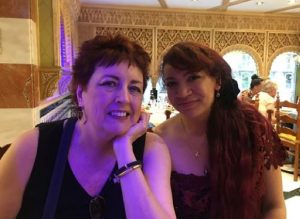 Alexa and I enjoyed the fabulous buffet prior to the flamenco show.

On the last day of the course, Alexa and I toured the famous Gaudi cathedral, the Sagrada Familia (Sacred Family). One has to see it to believe it. You can see photos here

It is truly one of the “wonders of the world” and Alexa and I were bowled over just being there. I will never forget being in that sacred, astounding space.

Here are a few of my photos, which do not really do the structure justice. The audio guide said that the cathedral, which is still under construction, is set to be completed in 2026, which is the 100th year anniversary of Gaudi’s death.

Also a photo of sweet Alexa right before we entered. 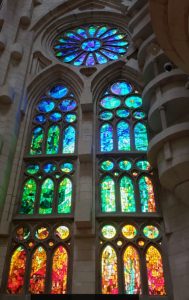 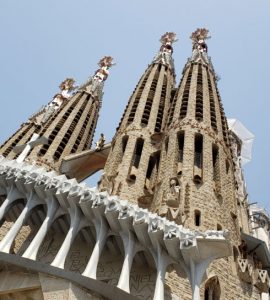 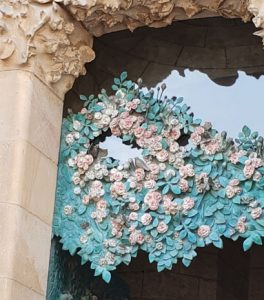 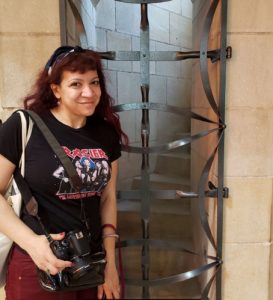 I planned my trip to include a ‘free day’ (Sunday 14th) in order to pack up and take a deep breath before departing for Boston on Monday, 15th.

So I bought a ticket for the Sunday matinee on the 14th. Here are some photos of the theatre, and a sweet photo of Lenine and Patricia and me meeting for a glass of cava in the Hall of Mirrors at the first intermission, a photo of Lenine with his cava, and a view of the interior of the Liceu. What a wonderful way to end my trip! 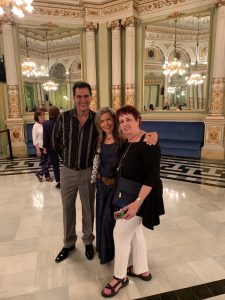 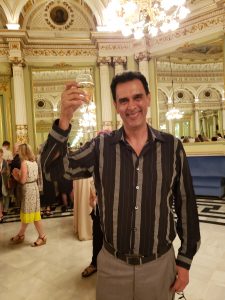 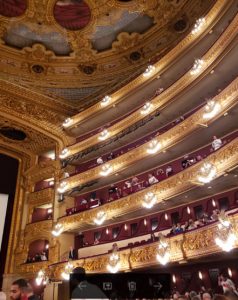 As I was walking back to the Residencia after the opera, I had a text from Alexa about meeting at our favorite “watering hole” for a farewell drink. Below is a photo of me with, left to right, Cherie Hughes, Alexa Anderson, and Frances Mitchen Diago – my 4 best buds during my stay in Barcelona.

As tired as I was, and with a full-blown attack of the “travel heebies”, I couldn’t pass up saying adios to these beautiful and talented women who mean so much to me and who made my stay in Barcelona all the more fun and enriching. 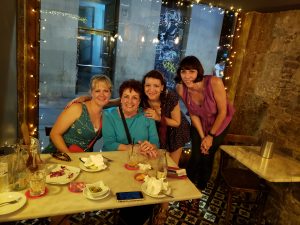 To sum up BFOS, this was everything and more than I expected. I love learning about new vocal repertoire, and I plan to assign some of these beautiful songs to my students.

Thank you, Patricia, for putting together such a well-organized and enlightening musical and historic experience. One I will never forget!

PS – I am not much for bringing home a lot of souvenirs (unless, of course, it’s clothing or JEWELRY) But when I do purchase, I try to choose something useful. Here are my refrigerator magnets from Barcelona! Yes – REFRIGERATOR MAGNETS. I mean, who doesn’t open their fridge every day? And when I do, I always think fondly of my trip. Not pictured: the A. Guadi spoon rest (complete with an image of a mosaic dragon), and a coffee mug with images of the colorful stained glass windows. 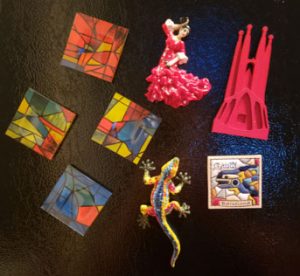