The weekend of July 27-28 was a stellar and most memorable one for many reasons. First, I was able to spend time with my dear friend and colleague Joy McIntyre, with whom I always have the most Joy-ous time discussing music, politics, travel, and life in general. Joy is a most erudite, entertaining, and brilliant artist with whom I have so much in common. Before Joy retired from BU and moved to Sarasota, I was her student and learned much from her vocal wisdom and direct teaching method.

Over the past many summers, Joy has been a most gracious hostess when I join her for one or two concerts at Tanglewood, the summer home of the BSO Boston Symphony Orchestra. Her sweet condo in Pittsfield, MA, is welcoming and comfortable. 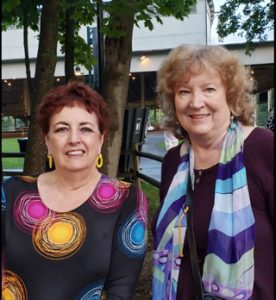 With Joy McIntyre after Act II on Sunday afternoon

For the past 15 years or so, Joy has been an instructor at BUTI (Boston University Tanglewood Institute), and treks up to Massachusetts from Sarasota which is her permanent home. It has been such a blessing to have this beautiful accommodation and to get to spend time with Joy all these years.

The above-mentioned weekend was no exception. When I learned some months ago that the BSO would be performing Die Walküre in a concert/semi-staged version, I couldn’t pass it up. So I ordered tickets right away and in June, I started to plan my trip to Pittsfield.

Now, this would have been/was the THIRD time I had seen Die Walküre in 2019. First, a fun trip to NYC with my dear friend and student Anne Orio to see the LIVE performance on March 25 at the Met (Die Walküre was the only Ring opera shown out of context of the cycle, with 3 separate performances this season). Just a few days later, on March 30, I was in Atlanta visiting my sister and we enjoyed the Live in HD broadcast of Walküre, with none other than Deborah Voigt as the broadcast host (and fondly recalling her Brunnhilde when this LaPage production debuted in 2012).

The “format” for this Walküre was unique, and not unlike the “spread out” version one sees at Bayreuth (the theatre designed by Wagner himself in Bayreuth, Germany, specifically for Ring performances). In fact, Joy and I attended a full Ring Cycle at Bayreuth in 2008.

The Tanglewood production presented Act I on Saturday night, July 27 at 8:00 PM.  Acts II and III were presented on Sunday afternoon at 2:30 and Sunday evening at 6:30.

This was what I would call “semi-staged” – in that the huge orchestra required filled most of the stage with little room for action and blocking by the principal singers. Supertitles were shown above the stage, as is the case with many opera companies for the past 20 years.  Even if one knows the opera well, as I do (having performed the role of Fricka many times), it’s quite helpful to have a word-for-word translation appearing above the stage. You get used to it. The artists, of course, were all facing the audience, and frequently had to look sideways at Nelsons on his podium…it could have been a bit awkward were it not for the fantastic singing and acting…very effective considering the limited playing area.

Andris Nelsons, Music Director of the BSO, conducted an amazing orchestra of young musicians, the Tanglewood Music Center Ordhestra. These are hand-picked, auditioned instrumentalists from all over the world who spend the summer working with world-class BSO musicians, and this year culminating with an opportunity to play this pinnacle of late 19th c. Romanticism. I can hardly imagine how overwhelming it was for them to have the honor of working with Nelsons and getting to perform with the stellar cast lined up for this performance.

I will forego telling the story of Der Ring des Nibelungen  – suffice it to say it’s a complicated story of gods, mortals, deceit, greed, and ultimate redemption…told over four evenings in its entirety. The most popular of the four Ring operas is Die Walküre (The Valkyrie), the most familiar section being the famous “Ride of the Valkyries” which is used ad infinitum in commercials, film soundtracks, etc. – I am sure Richard W. is spinning in his grave! Here is an instrumental excerpt, just to refresh your memory:

Act I has only 3 characters – Sieglinde, Siegmund, and Hunding. These roles were beautifully and movingly sung by soprano Amber Wagner (yep, that’s her surname), tenor Simon O’Neill, and bass Franz-Josef Selig, all perfectly cast.

Act II introduces both the head go Wotan (father of Brunnhilde and all the Valkyries), as well as his wife, Fricka, queen of the gods (the role I sang numerous times with the Arizona Opera Ring back in the 1990s).

Brunnhilde, also appearing for the first time in Act II, was sung by the reigning Wagner soprano who more or less owns that role nowadays, Christine Goerke (Christine was the Brunnhilde in the Met Ring, mentioned above). Wotan was sung by James Rutherford, a singer I had never heard of but quite fine in this role.

Act III begins with the stirring “Ride of the Valkyries” who were sung by first string professional singers from the Metropolitan Opera and some of whom sang in the Met’s Ring last spring.

Now, you may be wondering who sang “my” role, Fricka. It was none other than the distinguished mezzo-soprano, Stephanie Blythe. Stephanie has a regal bearing and swept onto the stage as if she owned it (“goody”, I thought). You see, Fricka is pretty pissed off at her husband Wotan (who has fathered numerous children by several women, but the 2 of them have no kids…go figure) because he is condoning, for purely personal reasons, the romantic and sexual relationship between Sieglinde and Siegmund. As the goddess of the home and marriage, Fricka is incensed that her own husband would condone incest and adultery.

So when Fricka enters for her 28 minute scene with Wotan, she is guns-blazing for a showdown. As Ms. Blythe is one of the most famous and experienced mezzo-sopranos on the international scene, not to mention the most high-profile artist on the stage, Joy and I had high hopes.

These hopes were dashed, about 15 measures into her big opening bit, when Miss Blythe took the liberty of re-writing Wagner by singing several passages of this scene a full octave lower than written.  It has been obvious from numerous reviews that it was either not noticed because the critics didn’t know the scene that well, or reviewers chose to ignore this very glaring “interpretation”.

Now, there are instances where a singer is indisposed and decides to forego an announcement to the audience.  I understand the dynamic of a singer feeling that he or she can ‘make it through’ but then getting onstage and realizing that some things are not possible.  That could have happened to Ms. Blythe. However, with that scenario, I nonetheless remain a bit shocked and dismayed that it was not mentioned in any of the reviews.

This performance was nonetheless exciting, moving, and memorable. The magic of Wagner never fails me. Here are a few photos taken right after the performance. The audience went wild. 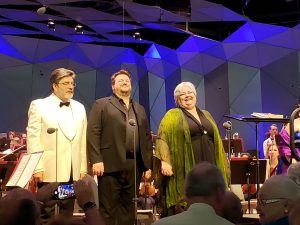 Students interested in taking lessons with Janice Edwards are encouraged to fill out a New Student Application Form. Please include prior singing experience (school or church choir, community theatre, etc.).